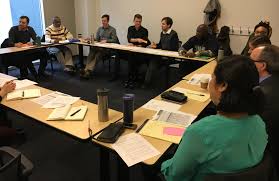 Dan has long advocated for improved engagement of Roseville residents and businesses in local decision-making. He knows that is key to our success as a community. Dan is grateful for Roseville’s long tradition of such engagement, and believes that the City must continue to build on those past practices, and constantly improve and enhance engagement efforts.

Dan worked with the rest of the city council to establish the Community Engagement Commission, and then to merge that commission with the Human Rights Commission due to their overlapping roles and missions. He believes that the commission plays an important role in advising the City on whom to engage, when to engage with them, and how to do that engagement as significant decisions are made by the City.

A key to successful community engagement, Dan believes, is for that to be an essential part of the culture of the City government, from the city council to City management to every employee. He continues to advocate for education and training at all levels related to the both the importance of and reasoning behind engagement, as well as what makes for successful engagement. To that end, the City management staff undertook such training in mid-2022 and is planning to put that training to use in upcoming engagement efforts.

The most notable upcoming engagement effort is the planned update to the City’s Community Vision, as it was expressed in the Imagine Roseville 2025 vision plan from 2005/06. Dan initiated this update because it is important for the City’s vision and aspirations that guide our work to be up-to-date so that City decision-making has a strong basis in where the community is currently at.